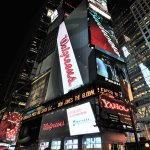 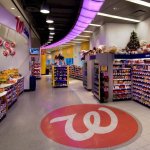 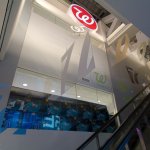 Project included a significant interior design challenge to enable this Pharmacy to succeed where other retailers had failed. The store planning needed to address the separation of vertical and horizontal circulation of patrons and product through three sales levels. A serpentine animated band of colored light was designed to lead patrons from the southern entries and elevators to the northern escalators, as well as separate eastern suspended ceilings and lighting from western pendant lit exposed ceilings. Six floors above grade and two of the four levels below were substantially gutted with additional work required throughout the tower to upgrade electrical, fire and data systems. The efforts by the construction and design team prepared the building for the proposed interior retail space, exterior signage programs and design statements, each contributing to the immense success of Walgreens at One Times Square.

The project won the ICSC Gold Award for Retail Store Design for stores in excess of 10,001 sq. ft. The Grand Opening was held on November 20, 2009 as scheduled.